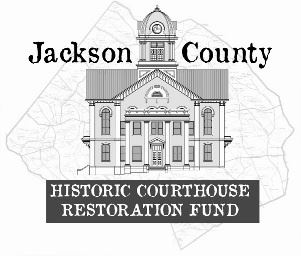 Since 2007, much has been accomplished:

The restoration of the exterior façade, including the clock and clock tower, was completed in 2010.

The first floor restoration/rehabilitation, including the new Jackson County Welcome Center and Historic Archives, the new landscaping, and new sidewalks were completed in July, 2014. A grand reopening of the building was held on August 10, 2014, and the first floor is now open for visitors and researchers. Phone number for the Welcome Center is: 706-387-7585; for the Historic Archives: 706-387-7684.

The restoration of the second floor courtroom to its 1908 period. Estimated date of competition TBA.

When the restoration/rehabilitation is fully completed, the Jackson County Historic Courthouse will appear as it did in 1908. The goal is to make it as historically accurate as possible while also allowing for multiple usage. Having this architectural embodiment of Jackson County's heritage open and user friendly brings many benefits to Jackson County and its citizens. The Welcome Center is becoming a magnet for tourism and functions as the gateway to the County. The Historic Archives is fast becoming a research mecca as many researchers come to the County to learn more about their family histories from historic courthouse documents.